Lodestones
The history of permanent magnets goes back to ancient times. Records from early Greek, Roman and Chinese civilisations make reference to rare and mysterious stones called lodestones. These lodestones could attract each other and also small pieces of iron. When suspended from a thread it was noted that they always pointed in the same direction. We now know that lodestones contain magnetite, an oxide of iron and that they are a naturally occurring magnet Although lodestones were considered an intriguing phenomenon by scientists of the day, they were not really utilised in any constructive way until around 1200 AD with the introduction of the mariner’s (magnetic) compass. The mariner’s compass is a device housing a pivoting magnetised needle, which freely and consistently points towards magnetic north. This enables travellers to consistently and safely navigate their way from one place to another. Modern research into magnetism is heading in many different directions involving a vast array of materials, however, at this time there are only four types of magnets that are commonly used throughout the world. They are Alnico, Ferrite, Samarium Cobalt and the most recently invented, Neodymium or “Rare Earth magnets”. 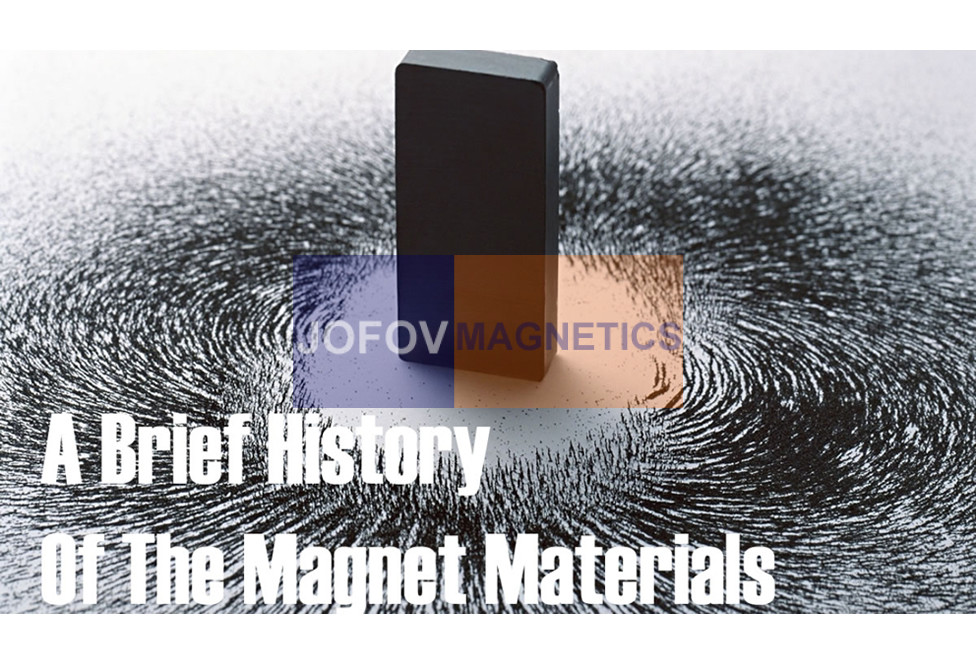 Alnico Magnets
Alnico magnets came onto the scene in the 1940’s and they started a revolution in the use of permanent magnets. For the first time, it was now possible to replace electromagnets with permanent (Alnico) magnets. This provided a design flexibility that had previously been unthinkable. The Discovery of these magnets allowed Alnico magnets to replace electromagnets in devices such as generators, electric motors and microphones which was a major technological advancement Alnico magnets are made from Aluminium, Nickel and Cobalt. They have an excellent temperature tolerance of up to 550ﾰC and are relatively corrosion resistant. Alnico’s biggest downfall is its poor resistance to demagnetisation. This instability sometimes makes Alnico unsuitable for certain demanding engineering requirements. Although they are still widely used today, Alnico Magnets are gradually becoming priced out of the market with the availability of newer, high tech and lower priced magnets that are now commonplace.

Ferrite Magnets
In the early to mid-1950’s came the creation of Ferrite magnets. Often referred to as ceramic magnets, Ferrites quickly became the preferred choice over Alnico due to their low cost and their strong resistance to demagnetisation. The availability of Ferrite magnets rapidly increased the momentum in the abundance of inventions and improvements to existing products using magnets. Ferrite magnets are used in all manner of products including electronic sensing devices, electric motors, lifting devices and magnetic separators Ferrite magnets are low cost and they have excellent corrosion resistance. They are very hard and as such, they are very brittle. This also makes them difficult to machine or drill holes. They have a very good temperature tolerance with relative magnetic stability at temperatures of up to 250°C.

Samarium Colbalt Magnets
1970 saw the entrance of Samarium Cobalt magnets into the marketplace. In a similar way that Ferrite and Alnico magnets had done before, Samarium Cobalt magnets brought a whole range of new characteristics, applications and possibilities to the industry. Samarium Cobalt magnets have several features that made them far superior to any magnet available during the time. They have a magnetic strength that is several times greater than either Alnico or Ferrite magnets, while at the same time they offer a very high-temperature stability. Temperatures of 300ﾰ C can be easily withstood by Samarium Cobalt magnets and in addition to this, they also demonstrate excellent corrosion resistance. However, samarium cobalt does have its disadvantages two of which are that they are very brittle and therefore extremely fragile and they are a very expensive magnet to produce. Samarium Cobalt magnets properties make them a perfect choice for high strength and high-temperature applications such as stepper motors and furnace sensors etc. Their corrosion resistance opens up numerous opportunities in marine environments and also in chemical industries.

Neodymium (Rare Earth) Magnets
1983 saw the discovery of Neodymium Iron Boron Magnets. The invention of this new magnet was announced almost simultaneously by two separate companies, (General Motors and Sumitomo Special Metals) who were working independently of each other on very different production methods of a very similar product. This announcement created a huge amount of interest as magnet technology had now taken another leap forward to produce an entirely new magnetic material. Neodymium Iron Boron Magnets, or “Rare Earth” magnets as they are more commonly known, are the strongest type of magnet available on today’s market. Their manufacturing process is also considerably cheaper making Neodymium’s a very cost effective. Unfortunately, Rare Earth magnets do have two disadvantages. They have poor corrosion resistance and they are more temperature sensitive than other magnets. However new high-temperature tolerant grades of Rare Earth magnets are being created and released on a regular basis. Rare Earth magnets offer high magnetic energy and good stability making them the logical choice for many electronics and engineering projects. Rare Earth magnets are used in all manner of ways in almost every sector of the magnetics industry such as mining, health, construction, electronics, education and the food industry. They have become the industry standard when size, strength and efficiency are required.

What Is A Permanent Magnet